Rushuna Tendo (天道 琉朱菜 Tendō Rushuna). (Born on June 3). Is the main protagonist of the series. She is an extremely busty, 16-year-old blond senshi who was trained in the positive teachings and kind ideals of Tenshi.

A former pre-Juttensen candidate, she is trained in the use of a revolver, specializing in shooting to disable rather than to kill using a form of Gun-Kata as seen in the final battle with Setsuna. Rushuna fights to end strife and chaos. She has excellent tactical analytical skills, being able to discern her opponents' weaknesses in the heat of battle and adjust accordingly to exploit them with the tools at her disposal. She also hugs opponents who are difficult to negotiate with to her chest in order to pacify them. Rushuna has a weakness for taking hot baths, and she indulges in this pursuit frequently. There are signs that she has feelings for Yajirou but does not want to follow up with them until her objective is over, there are times where she can be jealous when she sees him with other girls but she knows he always comes back to her. Rushuna earns the title of "Grenadier, the smiling Senshi" from Tenshi at the end of the series. Her first name may be a reference to a Rushana Buddha, which is kinda appropriate considering her being a traveler. In the manga, many people point out that Rushuna is a foreigner (or at least of foreign ancestry) because of her natural blond hair and large bust. She also had an older sister who rivaled her in skill but was corrupted by the Baron Iron Mask. She was raised by the eccentric Soun who taught her everything she knew. This differs from the anime in that she was trained in the Capital. At the end of the manga series, she visits her homeland, and after that she marries Yajirou. In the anime she is voiced by Mikako Takahashi and by Wendee Lee in the English dub. 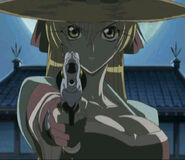 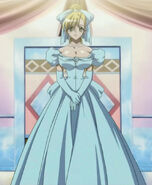 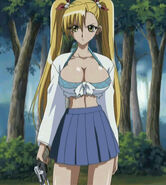 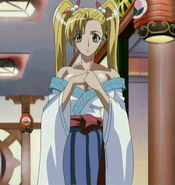 Add a photo to this gallery
Retrieved from "https://grenadier.fandom.com/wiki/Rushuna_Tendo?oldid=4132"
Community content is available under CC-BY-SA unless otherwise noted.